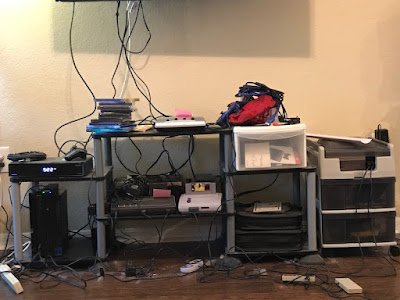 Folks who come here often might notice I haven't been here lately.  I have been pretty busy since moving to Florida last year. And most of all, especially in regards to this blog, if I'm being honest, we have not hooked our game systems up yet.

The PS3 is of course hooked up, as that is our portal to play DVDs and Blu-Rays as well as PS3 games, but that's it.  Other than the PS3, we have a variety of old school gaming systems, including the PlayStation2, the Atari 2600, the original Nintendo Entertainment System, and the SuperNES, not to mention our old Game Boy. 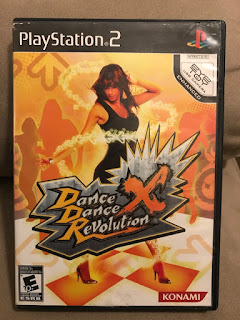 Our friend Dave was over and we went to the mall.  One of our regular haunts there is the non-franchise gaming store with old games - because of course we have old game systems.  The Bride was enamored with a Dance Dance Revolution X game with mat for the PS2.  As the conversation turned to how our PS2 wasn't hooked up, Dave, nice guy that he is, volunteered to hook all our systems up.  Dave's a saint.

An afternoon and a couple trips to Best Buy later, we had them all connected and working, a miracle.  And after I played Super Godzilla for the SNES for awhile, The Bride danced her heart out to DDRX for a bit.  We're happy, and the blog is back in business, thanks, Dave!

Posted by Unknown at 2:00 PM No comments: 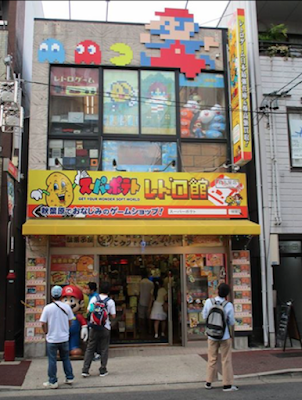 My friend Jeff Milliman, who had been working and living in Japan, sent me this pic of the Super Potato Store while he was there.

Here's what he had to say about it: "I visited the Super Potato store in the Osu section of Nagoya quite by accident... Holy crap, this place is astounding. It is crammed with consoles from the third generation on, games, peripherals, original strategy guides, posters, figurines, game soundtracks (seriously, they had the soundtrack to Elevator Action Returns)... I got about half of my souvenir shopping done in one stop. I really want to see their original store in Tokyo. I didn't take pictures inside, since a number of stores discourage that sort of thing; I wasn't sure if that was the case here and I didn't want to risk it."

Posted by Unknown at 4:50 PM No comments: 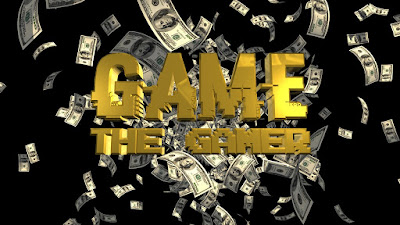 Most of you may know I regularly appear on three podcasts - The GAR! Podcast, The Make Mine Magic Podcast, and Nerdfect Strangers. Recently, Nerdfect Strangers hosted Noah Houlihan of the Plus Two Comedy Podcast. Co-host Jerry Whitworth and I actually were guests on that podcast several months ago, you can hear that here, but when Noah came to us last week, he was promoting his new YouTube game - Game the Gamer.

Similar to "Cutthroat Kitchen," only with videogames. Contestants bid for bizarre controllers to play videogames they've never played before. Yes, it's as awesome as it sounds. Noah is currently running a Kickstarter to do more episodes, buy weirder controllers, and have more sophisticated and cooler games and episodes. To hear more about Game the Gamer, check out the latest Nerdfect Starngers here to hear all about Noah's Kickstarter. Please pledge, the show rocks.

You can check out the pilot episode below:

Posted by Unknown at 1:00 PM No comments:

Godzilla Vs. The Switch

Apparently Godzilla is keeping folks in Japan from pre-ordering the Nintendo Switch.  Read about it here.

Posted by Unknown at 1:54 PM No comments: 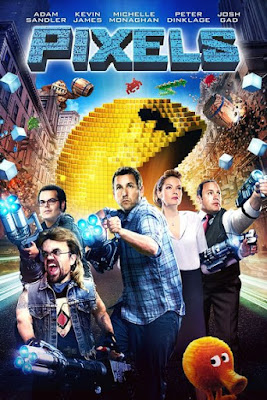 Pixels ~ Right out of the box, this movie had more than a few things against it, first and foremost is that it stars Adam Sandler. Now admittedly, I don't hate Adam Sandler as much as I used to. The Wedding Singer is actually pretty darn good, and there are a couple others that don't make me want to blind myself with scissors immediately when they come on. It also stars Kevin James as the President of the United States. I'll just leave that right there and let that little nugget fry into your brain before I even get to the plot of this one.

Now follow along, folks. Back in the eighties days of videogames and arcades, Sandler and James were champions, along with Josh Gad (the dimwitted but lovable snowman from Disney's Frozen) and believe it or not, Peter Dinklage (who I hope fired his agent for this). Today, they are pretty much losers - yes, including President Kevin James, the others being a electronics installer, a criminal, a conspiracy theorist, and an ineffectual President. 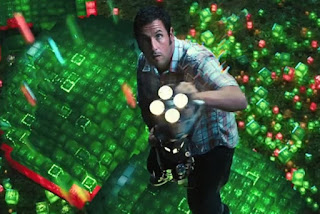 The bad news is that all those years ago video footage of their tournament was sent into space by NASA, and now that footage has been answered by an alien race who believe it to be a declaration of war. These misguided but powerful enemies begin to attack Earth using videogames as their weapons, a la 'the form of the destructor' from the original Ghostbusters. Yes, we get attacked by Galaga on the aliens' first strike. 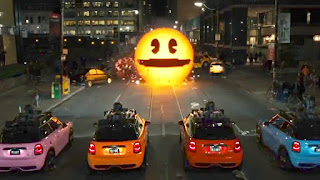 The situation gets worse from there as Centipede and Pac-Man attack and the president recruits his old friends to 'fight fire with fire,' as only old school videogamers know how to beat the bad guys at their own, pardon the pun, game. It gets old real quick. Now normally I steer clear of Adam Sandler flicks, but this juicy and explicit video review (not safe for work or kids) made it impossible to pass up. I just had to see this train wreck. 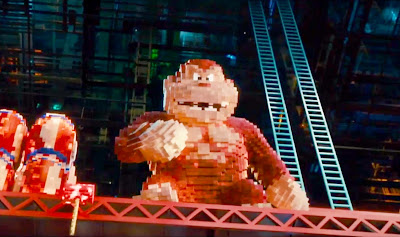 What is interesting to me is that before anyone, Ghosthead or not, spoke up about how the remake/reboot/re-imagining of Ghostbusters was ruining their childhood, the same accusations were made at this movie… and in this case, I can kinda see it. I grew up in the era of these videogames, and it does kinda feel like these people are taking a crap on my childhood.

Now it's not as bad as the above reviewer says, but it is pretty awful. If it wasn't for free cable I would be complaining much more loudly. It's watchable, and the kids might enjoy it more than adults, but then again, they won't have the slightest clue about these games or the other dated pop culture references here. And Peter Dinklage should be ashamed of himself…

I'm a professional writer and a reviewer of popular culture in all its forms. I've done stints in radio, journalism and video retail. Ask me anything about movies, television, music, comics or especially French fries and you’ll be hard pressed to shut me up.

Check out my pop culture blog Welcome to Hell here.

Listen to me on The GAR! Podcast and The Make Mine Magic Podcast.

Watch me on the All Things Fun! New Comics Vidcast.

Check out my short story "Live to Write" in the Strange World anthology.

Wanna talk? Hit me up here.